The Ketogenic Diet is like marzipan; you either love it or you hate it. Some say ‘eating keto’ has cured their lifelong health condition, while others say it can be damaging.

Gerry’s Wraps surveyed its own Facebook audience and invited New Zealand Dietician and Author Caryn Zinn PhD to comment on the feedback received.

Caryn is well placed to comment as her research and clinical practice focusses on the application of carbohydrate-restriction and ketogenic diets for metabolic health and sports performance. If you’re looking for your own answers about a ketogenic or low-carb diet, this article is for you.

Following recent news stories about the positives and dangers of a ketogenic diet, Gerry’s Wraps decided to do its own research and heard an astonishing range of health reasons for why Kiwis choose to eat keto or low carb.

In June 2020, Gerry’s Wraps asked its Facebook followers why they ate a low-carb or ketogenic diet and was inundated with replies.

We explore some of those personal stories below.

Two years after starting her ketogenic diet, Tara Adams from the Kapiti Coast no longer needs her medication for lupus and an underactive thyroid. “I’ve been able to come off my lupus medication and have changed my thyroid ones to a natural replacement,” she says.

Since starting a keto diet two years ago, Tara Adams (pictured with her husband) no longer needs her lupus medication and has replaced the medication she used to take for an underactive thyroid with a natural supplement.

Tara is delighted with the result, saying she decided to go on the ketogenic diet after reading up about how it might help her particular combination of autoimmune diseases: “I found out about it from a friend who had had positive results, and then I researched it for myself.”

Tara says her Natural Health GP supported her decision and adds the results don’t just stop there: “Now I sleep better most nights and my weight has stabilised too.”

Lupus is a form of arthritis which can affect joints, muscles and other parts of the body, while people with an underactive thyroid (hypothyroidism) make less thyroid hormone. This can cause slower metabolism and can hamper the body’s ability to grow and repair itself which can lead to weight gain.

“Ketones (the breakdown of fat) are important signalling molecules and they can decrease the production of reactive oxygen species, known to contribute to inflammation.

“From a food perspective, removing sugar or carbs, and rebalancing the type of fat consumed by eating whole foods and avoiding seed oils, inflammation around the body is often reduced.

“For thyroid conditions, carbohydrate restriction is definitely helpful, however for some people having a slightly higher level of carb (i.e., still a low carb diet) rather than going as low as required in keto, can be suitable.”

Cantabrian Sheran Taylor has lived with Type 2 diabetes since she was diagnosed nearly 20 years ago. Sheran says she has always managed her diabetes with a healthy ‘normal’ diet and insulin medication up until the past year when her body became more insulin resistant.

Sheran Taylor of Canterbury (pictured here with her husband) has avoided increasing her medication for Type 2 Diabetes by following a low carb diet.

“About a year ago my body started changing. I tried to keep the sugars down but it wasn’t really working.”

Sheran’s doctor advised her to increase her insulin. But instead of upping her medication, Sheran tried changing her diet from ‘normal’ to low carbohydrate.

“I didn’t want to increase my medication, so in February this year, with my Docs’ help, I started lowering my carbs.”

I didn’t want to increase my medication, so in February this year, with my Docs’ help, I started lowering my carbs.

Sheran’s blood sugars stabilised from eating a low-carb diet and there was no need to increase her insulin. “Going low carb has been really good for me since.”

Dietician Caryn Zinn explains that eating a low-carb diet if you have diabetes makes a lot of sense: “People with prediabetes or type 2 diabetes are typically insulin resistant and…struggle to process carbohydrate foods efficiently.

“I work with my diabetic clients to achieve either partial or complete remission of their diabetes using a moderately low carb, or keto eating pattern in some cases.

“Alongside achieving reduced or normal HbA1C (the measure of blood-sugar control), many are able to reduce or even remove their medications.”

Caryn cautions that if opting for a low-carb diet for diabetes it’s best to do so in conjunction with a low-carb-specialist dietitian,  registered nutritionist or a medical professional to ensure that it’s done properly and that medications are adjusted safely. 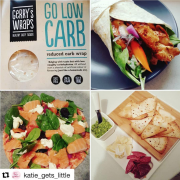 Quesadillas, tortillas and kids’ crackers feature in these keto-friendly recipes made by fans of our low carb range.

New Zealander Kerry (not her real name) used to get debilitating migraines and abdominal pain until she changed her diet to ketogenic and gluten free. This helped her lose weight and stopped her stomach pains and most of her migraines.

Kerry (not her real name) used to get debilitating migraines and stomach pain, but going keto and gluten free has changed that and she now lives pain free.

“I’ve been gluten-free since 2011 after trialling cutting out gluten due to abdominal pain. I found that not only had the abdominal pain gone but so did many of my migraines.”

After going gluten free, Kerry discovered that eating a ketogenic diet helped her still further. “I found that losing a significant amount of weight (22kg) helped with the period migraines (in part due to raised levels of oestrogen in my fat cells).”

It was a happy coincidence when Kerry found that going gluten free and ketogenic also stopped her migraines, as her migraine medication did not agree with her.

“I have tried using migraine preventative medication in the past. Both times with terrible side effects (in differing ways).”

Kerry did her own research to solve her health conditions and puts her success down to eating a healthy, mostly (but not exclusively) ketogenic diet: “I googled diets that help migraines. I found details about keto being effective but I was traveling so much for work that staying in the metabolic state would have been problematic.

“So I went with the migraine diet which is very low carb with plenty of veg and omega 3, whilst being careful of omega 6 and sugar intake.”

I’ve been gluten-free since 2011 after trialling cutting out gluten due to abdominal pain. I found that not only had the abdominal pain gone but so did many of my migraines.

Dietician Caryn Zinn PhD says that a combination gluten-free and ketogenic diet can be especially helpful for managing migraine pain as both are very anti-inflammatory ways of eating.

Caryn also says that varying levels of carbohydrate restriction can work for different migraine sufferers: “Some people find going moderately low carb is helpful, while others find benefit from achieving a deeper level of ketosis (which makes sense as ketones have neuro-protective signalling effects).”

Caryn stresses that this kind of diet works best as a treatment for migraines alongside other physical treatments, and a focus on stress-management strategies.

Caryn advises anyone considering a gluten-free and/or ketogenic diet to help manage their migraines, to seek professional help: “There are lots of resources out there as how to start a low carb diet, but there are nuances of a well-formulated ketogenic diet, so finding a dietitian or nutrition professional that specialises in this work is important to get it right.” 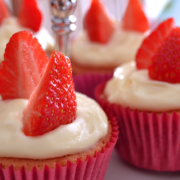 Still Have Your Cake & Eat It

Avoiding gluten in your diet can seem time consuming and expensive. But there are many tasty options that make eating gluten free quick and easy.

Rachel (not her real name) claims that eating a ketogenic diet has helped manage her symptoms of PCOS and reduced her risk of developing insulin resistance which can eventually lead to Type 2 diabetes.

Eating a keto diet has helped PCOS Sufferer Rachel (not her real name) lose weight, clear up her skin, boost her energy levels and reduced her risk of developing Type 2 diabetes.

Polycystic ovary syndrome (PCOS) is the most common hormonal condition for women of childbearing age and can cause weight gain, acne and infertility.

Women with PCOS produce too much insulin during ovulation which can eventually lead to insulin resistance. But Rachel says that following her ketogenic diet has put paid to that: “PCOS can make you insulin resistant and it has also helped me with that.”

Dietician and Co-Author of the What The Fat? book series Caryn Zinn explains there are parallels between PCOS and Type 2 diabetes and that both conditions respond to a lower-carb diet:  “Like with diabetes, a low carb diet does help those with PCOS to manage symptoms and lose weight.”

Keto has helped me to lose weight as with PCOS it’s really hard to lose weight…It has also helped with my skin, I have more energy and my bad cholesterol levels have dropped.

Caryn says different degrees of carbohydrate restriction can suit different people depending on their health profile: “Sometimes going for a more extreme carb restriction like keto is better for some –  it’s a very individual thing.

Caryn is quick to add that not every person with PCOS has the same set of issues, so it’s important to tailor the style of eating to the individual: “Working with a professional that specialises in this area of health is important to get the best outcome for the individual.” Made from coconut & Himalayan salt, the Keto Pure Wrap has just 8g carbs – suiting those on keto diets for weight loss, diabetes & other health conditions.

Christchurch-based Rochelle Cassidy lived for many years with excruciating period pain caused by endometriosis. But she now lives pain free and doesn’t need pain medication following her change to a ketogenic diet.

“I had lived with endo for years and years. About 6 years ago I switched my diet to keto to see if it would help. I no longer really suffer from horrendous pain before, during or after my period.”

Rochelle had a hunch that her diet wasn’t helping and did her own research which led her to trying a ketogenic diet. “When you suffer from endo or PCOS your body can find it hard to process a normal high carb diet, which was definitely the case for me.”

Another respondent to Gerry’s Wraps’ survey with PCOS, endometriosis and fibromyalgia agrees that going keto has helped her get off pain medication: “I now have repeat prescriptions expire at the pharmacy for pain meds. That never used to happen!”

I now have repeat prescriptions expire at the pharmacy for pain meds. That never used to happen!”

Dietician Caryn Zinn says PCOS, endometriosis and fibromyalgia are all conditions are characterised by high levels of inflammation, the symptoms of which can be alleviated with a restricted diet: “A low-carb or keto diet has the ability to reduce inflammation and for many people the associated pain.”

Caryn concludes that if you’re considering a ketogenic or low-carb diet to improve your health, it’s important to focus on eating unprocessed food that is naturally low-carb or keto: “The key is to consume a well-formulated diet which includes whole foods with lots of good quality foods, rather than commercial keto products.”

Gerry’s Wraps thanks those who kindly shared their stories for this article. Special thanks goes to Dr Caryn Zinn for her expert comments and insights on how a ketogenic or low-carb diet can help with some health conditions. Caryn is a New Zealand-based Academic at AUT and a Registered Dietitian. Her research and clinical practice focusses on the application of carbohydrate-restriction and ketogenic diets for metabolic health and sports performance. She is the co-author of the What The Fat? book series which has a whole-food low carb, healthy fat philosophy.